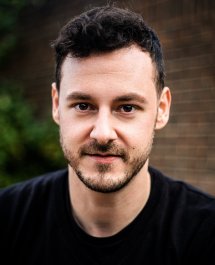 Martyn Ford is a journalist from Hampshire, where he writes for the Bordon Herald. His first book, It Happened to Me, a collection of shocking true stories, was published in 2010 by Summersdale. In 2011 Martyn’s TV script made it into the final stages of the BBC’s Laughing Stock Competition.

His newest novel, Chester Parsons is NOT a Gorilla, published in March 2019. Martyn's The Imagination Box series for readers aged 9+ is out now.

Chester Parsons is Not a Gorilla

When Chester discovers he can mind jump, his sister Amy wastes no time in putting his new skills to work boosting the viewing figures on her video blog. And when a TV company takes them global, he does his most daring mind jump yet, into the brain of Tito the gorilla. The trouble is, when he tries to return to his own body - it's gone!

Has it been stolen? But who would want it, and why? And how come Chester suddenly has the urge to search Amy's hair for fleas? The quest to find the answers takes him on a journey beyond his wildest imagination.

A fast-paced, mind-boggling and hilarious yet thought-provoking read from the author of The Imagination Box series.

The Imagination Box: A Mind Of Its Own

There was a sabre-toothed tiger in the playground. Wandering thoughts, Tim had come to realise, were extremely dangerous things.

Nearly a year has passed since Tim, Dee and Phil the finger monkey (with the help of some fire-breathing bear-sharks) defeated Wilde Tech Inc and destroyed the imagination space. But since then, it's become increasingly clear that there's something wrong with Tim. His imagination seems limitless - anything he imagines immediately appears in front of him, with no need for the imagination box. Which has both good and bad consequences.

Then, in the blink of an eye, everything changes. Tim wakes up and discovers he's in his old orphanage. No one, not even Dee, knows who he is. He's completely alone - his worst nightmare. But soon he realises who is to blame. His old enemy, Clarice Crowfield, has hijacked a new, all-powerful machine and created a reality where she is in charge! Tim must find Professor Eisenstone, convince Dee that they really are best friends (and, of course, recreate Phil) - then literally put their world to rights.

The Imagination Box: Beyond Infinity

Timothy Hart is getting used to the good life with his new Imagination Box.

Anything he can imagine, he can create! There's only one rule - the Box mustn't leave Tim's room at the hotel where he lives.

But Tim has never been good at following rules - especially when there's the opportunity to 'imagine' his homework into being without actually having to do it.Tim is feeling rather pleased with himself, until he notices the strange people following him, and then chasing him, and then his beloved Imagination Box being ripped from his hands!

He'll need the help of a Top Secret Scientific Institution if he's going to save the Imagination Box from corruption of the worst possible kind.

Sequel to the critically acclaimed debut, The Imagination Box.

“There is a box. Anything you imagine will appear inside. You have one go, one chance to create anything you want. What would you pick?”

That’s exactly the question ten-year-old Timothy Hart gets to answer after discovering The Imagination Box. The greatest toy on earth.

The top-secret contraption transforms his life, but when the box’s inventor, Professor Eisenstone, goes missing, Tim knows he has to investigate.

With the help of a talking finger monkey called Phil, he sets out to find the Professor. In order to rescue his friend, he must face his darkest fears and discover the true potential of his own mind.

Faber Children's Books will publish in May 2015.